So we made the move to cloth diapers for all 3 kiddos, except the twins sometimes wear disposables. I thought that it was helping with Michael's rashy bottom, but no I was wrong. The poor kid has the reddest bottom and is so sore. He has also slept horrible for the last nights. Last night was the worst. Then tonight his bottom was so red. Hopefully he is teething, which although it is difficult to go through, at least there is a rhyme or reason to why this is happening.

On a better note, the twins seem to really want to eat. I think they are finally ready for 3 meals a day. They ate their afternoon bottle and not more than 3 hours later they were hungry, but didn't want a bottle. Both of them seemed to really enjoy their carrots then went on to have almost a full bottle not much later. Hopefully with eating food and bottles, they will be able to go all night without having to have a 10:00pm bottle.

I made ratatouille tonight with eggplant, zucchini/summer squash, and tomatoes from the farmer's market/farms. I was pretty amazed at how good it came out. I was just as surprised if not more surprised that Michael seemed to like it. I really didn't think that he would eat it at all. He is not really a veggie kid nor the greatest eater, though sometimes he really surprises me!

We spent way too much money today. We bought a new stroller since Michael now likes to be out of the stroller so much. We started off the day driving down to Hingham to try out the Valco twin stroller with the toddler seat. It is amazing. Michael sits on top of the stroller in the middle in a seat that attaches to the sides of the stroller. This means that when he gets tired of sitting he can get out and the twins are in no danger of toppling over with the weight balance being off. He really seems to like sitting above every one. Almost as soon as he was in the seat, he started waving to everyone. The stroller maneuvers amazingly well for having the ability to cart 3 little ones around. I was even able to maneuver it with one hand while holding Michael. After that purchase we went to the apple store and bought a new imac. This computer is going to be so good for photos and videos of the twins. The 24 inch monitor is awesome and my husband has been wanting a Mac for so long now.

I think we have decided on a date to baptize the 3 kids. I think the plan is for Oct 4th. We still have to confirm with Fr John. Eva Rose's dress is finished I am so excited with how it came out. I now need to cut out and sew the short set for the boys. Hopefully this will come out as well as Eva Rose's.

I can't wait to go for a walk tomorrow with the new stroller, start using the Mac for photos, and start making the boys christening outfits.

I have also made the decision to start trying to lose weight. Luckily I have lost the baby weight, but there is still more to go. Wish me luck on losing weight and exercising!
Posted by Amy at 7:43 PM 1 comment: 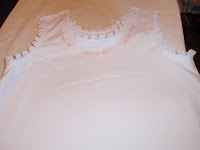 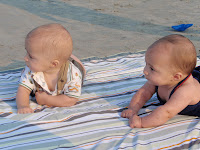 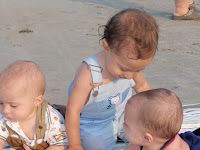 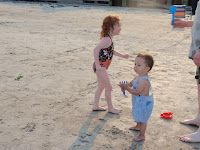 We had a great weekend, but I can't believe that summer is close to being over. Saturday we went to both the Wakefield and the Winchester Farmer's Markets. I am loving buying all the different veggies from the Hmong Farmer's. this week we bought amaranth, watercress, pea pod tendrills, and squash flowers. Tonight we had gnocci that we bought at Wakefield's market with watercressfrom the Hmong Farmer's, goat cheese from The Winchester market, and yellow cherry tomatoes from the Winchester market. It was so good!!!!!!!!!! I can't wait to try stuffed sqhash flowers, and we have already had the pea pod tendrills and the amaranth in the past.

Sunday, we went to the beach in Kennebunk and had a great time with all 3 kids and my sister in law and brother in law. Uncle Ted and Dad took Michael in the ocean and Michael seemed to be having fun, while Auntie Connie and Mom sat in the shallow water with the twins.

We are trying to have the twins and Michael baptized. How stupid to try to have all 3 done at once. Scheduling is a bear. The good thing is that I am attempting to make the outfits for all 3 kids. I worked on Eva Rose's dress today and it is almost complete, yeah!!!!!!!!!!!! I just have to do button holes and put the lace on the bottom. We decided to go a little non-traditional and do simple cotton outfits. I really had no desire to dress them in satin type outfits that were really dressy. I am really happy with how the dress is coming out. I can't wait for it to be finished

I just went to the care pages website to print out all the updates from when the twins were in the hospital with RSV. Looking back at the updates and the pictures is so bizarre. In some way I can't remember them this little and this sick. i guess that's a good thing since they were so sick and it was probably the most scariest time in my entire life. I never thought that I would be rushing my 2 1/2 week old preemie to Children's hospital and have him admitted on a respirator. After having him in the hospital, we kept a close eye on his sister and 1 week and 1 day later she was admitted. Thankfully Thomas came off the respirator after 24 hours, but his sister was on for 6 days. Luckily it seemed as if all this time helped her to heal quick and she was able to come home the same day as her brother. Reading all the updates and the comments made me realize how lucky were are to have such strong children, great hospitals and doctors, and such caring family and friends. Now that the twins are 6 1/2 months old, and growing like weeds, it amazes me that they were so little and so sick. It is also amazing how much Michael has grown. I am so lucky to have such beautiful and wonderful children. I couldn't ask for a better family!

This is a crazy life, but I love it!

So we ventured out to the 99 restaurant with all 3 kids and my brother in law. Scary!!!!!!!!!!!!!!!! We decided that it was time to by a 2nd chair style high chair especially since we were attempting dinner with all 3 kids. Things were going ok til just before we were leaving (literally). I had all 3 kids on my lap screaming as Tom was putting the chair together. I kept thinking. "Why were we going to put ourselves through this? We should just stay home and probably never venture into a restaurant for a very long time!" But, we decided to attempt the restaurant. The twins were fed peas and a bottle before we left and we brought the rest of their bottle with us. Getting all 3 kids into the restaurant with all the equipment was tough, but with 3 afults, doable. Fortunately for us and everyone in the restaurant. All 3 kids were great!!!!!!!!!!!!!! The twins even slept through most of dinner. Probably much to late of a night for all the kiddos, but how nice is it to be able to go out to dinner and have 3 kids under 1 1/2 behave!!!!!!!!!!!!!!!!!!!!!!

Life is crazy, but awesome!