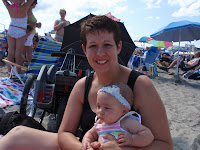 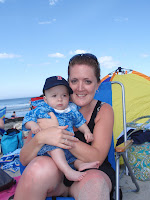 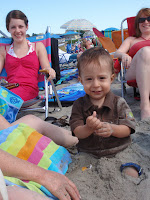 What a great weekend. On Saturday we packed everyone up and went to the first farmer's market in Wakefield. It was small but hopefully it will get bigger as time goes on. We bought some Italian bread and some blueberry muffins, some applesauce, and some mustard greens and some pea pod stems. Later that day we enjoyed a cookout where Michael decided that he wanted to eat steak tips by himself as well as the broccoli. He also loved eating corn on the cob off of Nonna and Papa's cob. Later that night we had a fire in our new fire pit. As corney as it may sound we all sang Puff the Magic Dragon While Tom played the guitar (personally i loved every second of it. Michael loved it and went to sleep with little trouble.

On Sunday, another beautiful day, we headed up to York for a cousin's 50th birthday party. We had a great time. It was Michael's second time at the beach (both times being in York) and the twins 1st time. Michael love being burried in the sand. We almost lost his new keen sandles on the sand when he decided to come out of the sand. The twins were very comfortable and fell asleep in whose ever arms were holding them. What a great day we all had.
Amy